Can't they just tell by how far along Steffy is?

No she didn't.Her clothes proved it.There has been at least 2 days between the 2 nights

The morning after the ons Steffy was wearing this 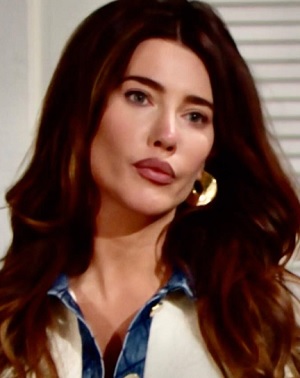 And with Finn, she was wearing this 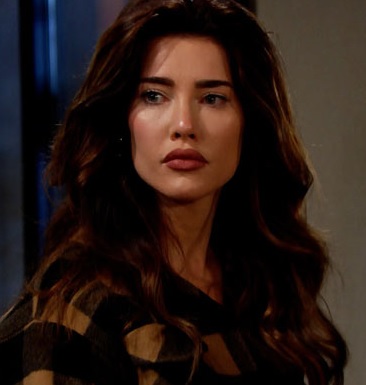 There was at least 2 days between these 2 nights

Blame it on the filming that

- had Hope changing her dresses two episodes before Leffy

- showed that it was already dark outside (nighttime footage), when Steffy finally was again wearing a new outfit after she had come home,
Liam had sometime between leaving the hospital and following Steffy to the cliff house, gotten rid of his sweater and the checkered Short and only wore the jeans jacket from the hospital and under it, again the white Shirt from the poster pic
-> and Leffy talked as if they had just arrived at the cliff house and that Liam had wanted to tell Hope the truth at the hospital, Steffy then mentioning that Kelly was sleeping somewhere else...

Steffy:
- she wore the outfit you have posted, beginning from the time of the morning after the ONS (Dec. 2)
until she changed into
- the new outfit ( Dec. 11) after she had left the hospital and still wore that before she then changed into the lingerie and had sex with Finn (Dec. 21)

Liam: had that white short (the one he wears on the poster pic) when he slept with Steffy, had it the morning after
then had a checkered T-shirt and over that, a Navy Ribbed Quarter-Zip Sweater by RRL (Dec. 2)
- had that Sweater at the hospital at the episode Dec. 11,
left the hospital wearing that sweater and a jeans jacket (when he followed Steffy and claimed he had an important call to make)
- until he finally was back in the white Shirt and that jeans jacket at the end of that episode at the cliff house, while the air shots showed that it was already nighttime, Steffy commenting that Kelly was sleeping somewhere else

Hope:
- had a Daisy Print Ruffle Long Sleeve Playsuit on the morning after the ONS (Dec. 1)

and had that dress until the episode of Dec. 8, when she said at the hospital that she would
"Hope: You know, I think I'm gonna go home and check on the kids real quick, but can you text me if anything happens?"

when Hope then returned to the hospital, she had a new outfit Dec. 9, while Liam and Steffy still wore their old ones

Hope had that new outfit until she changed into pajamas