Liam Does Have A Little Bit Of Decency

Steffy promised him she wouldn't tell Wyatt about Ivy and Thomas, but she did. Ivy had every rights to confront her, that doesn't mean she deserved to be shoved against the panel. Don't forget Steffy violating the restraining order after she promised Liam she would stay away from her. Causing Ivy 2 other concussions, Or getting snuggled half-naked in bed with his brother. Her list of crap is endless. Steffy had other options with Aly. She admitted so. She chose to hide the evidence and lie to the cops and Thorne. She was responsible for her cousin's death, and JMW agrees. Liam and Bill aren't decent when they are around Steffy. Never have been, never will be

And Hope did not toss Thomas into a vat.

Who’s talking about Thomas? Not me

Making a point about exaggeration.

Well I’m talking about Steffy and Ivy not Thomas

I talk about Thomas and Steffy and yet Hope, Liam and the cabin are always being brought up.

I’ll remember you said that

No need for ugly faces.

I was always told that your face could freeze when you're making a face like that. Be careful.

Have to be careful.

tell it to Hope, she needs it 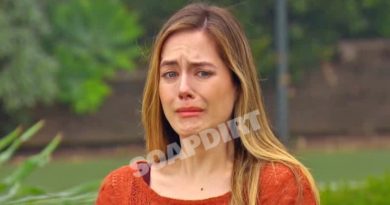 --
There is no Hope for this show